Over 140 civil society organisations gathered at the United Nations Church Centre on 18 September, the day before 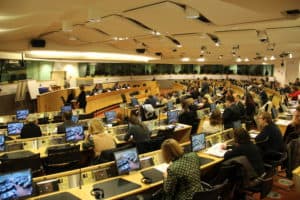 the UN General Assembly Summit for Refugees and Migrants. Civil society representatives, including many refugees and migrants themselves, and representing every continent of the world, met to discuss visions for after the Summit.

The meeting began with an opening plenary, before breaking into three parallel sessions on 1) commitments for refugees in practice, 2) commitments for migrants in practice and 3) commitments for and by refugees, migrants and societies. Throughout the morning’s meetings, the participants shared views on the New York Declaration, and its Annex I Comprehensive refugee response framework and Annex II Towards a global compact for safe, orderly and regular migration. The civil society joint statement and ‘scorecard’, drafted in consultation with the 22 members of the self-organized civil society Action Committee and signed by nearly 100 civil society organizations worldwide, was used as a starting point for the discussions.

While the New York Declaration was met with mixed reviews, and uncertainty was felt on collective commitment to the two, parallel processes launched at the Summit – one to create a global compact on refugees and one on safe, orderly and regular migration – all were unanimous on one point.  Civil society must be relentless and persistent in holding governments to commit and account in the days, months and years following the Summit, so that real changes are made on the ground for refugees,) in need of protection, safe passage, solidarity, inclusion, decent work and livelihoods, and for the societies that host them.