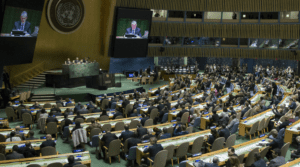 Co-facilitators Announced for the Global Compact on Migration Process

Acting on paragraph 63 and Annex II of the New York Declaration, the President of the UN General Assembly has appointed the New York-based permanent representatives of Mexico and Switzerland  to co-facilitate the process “leading to the adoption of a global compact on safe, orderly and regular migration to be presented at an intergovernmental conference on international migration in 2018”.