On the basis of input from civil society organizations around the world, and building upon the recommendations put 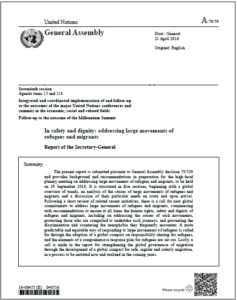 forth in the UN Secretary General’s report  “In safety and dignity”, the self-organized civil society Action Committee is proposing four courses of action for states to take as Outcomes of the upcoming UNGA Summit 19 September:

These actions are described as a set of starting points in a 5-page document that the Action Committee prepared and released on 24 June, entitled: A new deal for refugees, migrants and societies. With an introduction followed by one page of perspectives on process and substance for each of the four actions, the “new deal” was drafted with very active input from the 22 members of the Action Committee, as well as some 140 civil society organizations around the world who either completed the Action Committee’s on-line survey or submitted key messages in their applications to the UN (accessible on-line) to participate in Summit processes.  95 organizations  signed on in support of the “new deal”.

The two objectives of the document are to: [1] express some of civil society’s principal starting points to the Summit co-facilitators Ireland and Jordan and other UN Member states as they begin negotiating  their Outcome document for the Summit, and [2] set and maintain a baseline for civil society advocacy to UN Member states on that Outcome straight through to the Summit itself if necessary. In that direction, members of the civil society Action Committee presented the document to the co-facilitators and to the “Friends of Migration” at meetings in New York 24 June.

“A new deal for refugees, migrants and societies” is available also in French  and Spanish .

If your organization is interested in signing on in support of the New Deal, you can do so here.