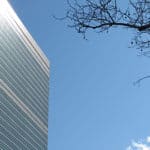 As 193 governments unanimously adopted the New York Declaration for Refugees and Migrants at the UN General Assembly yesterday, civil society organizations called for action now, immediately in the days and months following the Summit.

The Summit launched explicit commitments to create two global compacts over the next two years: one on refugees and one for safe, orderly and regular migration. But millions of refugees and migrants and the countries to, through and from which they move cannot wait that long for change to be implemented on the ground.

Speaking at the opening plenary of the Summit, Syrian refugee and activist Mohammed Badran expressed frustration at the sluggishness of governments to turn their words into reality. On behalf of all refugees and migrants mobilising and implementing change, he pointed out that they “are already taking action; we want world leaders to do the same”. Badran’s intervention followed on the heels of the powerful speech given by U.N. High Commissioner for Human Rights, Zeid Ra’ad Al Hussein. He reminded member states of the “bitter truth”; that “this summit was called because we have been largely failing…failing millions of migrants who deserve far more than lives marked by cradle-to-grave indignity and desperation.”

In response to the New York Declaration, nearly 100 civil society organizations released an ActNow  statement and ‘scorecard’. It negatively evaluates a number of the commitments in the Declaration, most notably the conspicuous reluctance of governments to commit to sharing responsibility for refugees in practice, now.  Other commitments are met with more hope or anticipation, in particular the development of the global compact on migration, and the launch of a global campaign, with national support, against xenophobia and for social inclusion, entitled “Together – Respect, Safety and Dignity for All.”  But, it remains to be seen how these global initiatives will develop and really impact realities on the ground.

Therefore, above all, the civil society joint statement urges states to take seven immediate actions to truly make a difference: a “difference on the ground for the millions of refugees, migrants and internally displaced people (IDPs) in need of protection, safe passage, solidarity, inclusion, decent work and livelihoods, and for the societies that host them”.

As the New York Declaration reaffirms that “all human beings are born free and equal in dignity and rights”, civil society reminds states to uphold that principle; refugees and migrants “may lose many things when they cross international borders, but never their human rights and dignity”.

[See www.refugees-migrants-civilsociety.org for more information about organised civil society advocacy and action around the UN Summit for Refugees and Migrants.]