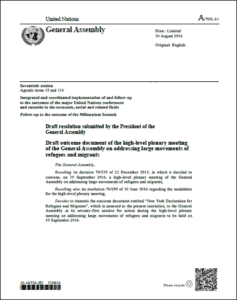 The UNGA Summit outcome, now called the New York Declaration for Refugees and Migrants was adopted as a UNGA Resolution on 9 September. On 19 September the adoption of the Resolution will be more ceremonial in nature with the more formal adoption having already taken place.

On 8 September, the Office of the President of the General Assembly released also the concept notes for the 6 roundtables of the UNGA Summit for Refugees and Migrants.  The concept notes give an introduction and background note to each Roundtable, before discussing priorities for international action and suggesting questions for the consideration of participants.

The titles of the six roundtables are: